This page contains an overview of some of the projects done by me, Jan Derogee. Click on the project/image you want to know more about. If you have any questions or suggestions feel free to contact me by sending me an email. The contact info is located in the top right corner of this page. 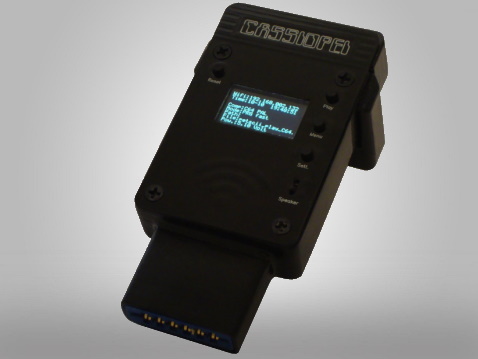 The Cassiopei v2.0 is the successor of the Cassiopei. This v2.0 version is much more practical (no PC software required). An OLED display for configuration,TAP-file navigation and status info. An SD-card for unlimitted storage. Wifi for virtual file mode, NTP for accurate time in GEOS and configuration through a webbrowser. 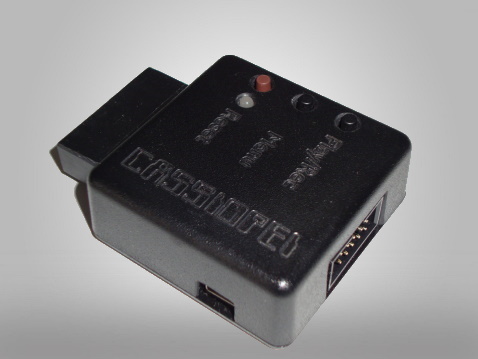 The Cassiopei is a versatile cassetteport based device, it can load .PRG files at 50 times the normal speed. Or .TAP files at regular speed. It is to be configured using a PC program (Windows only).

The 1541-III is a IEC based .D64 reader designed to act like a 1541 diskdrive. The .D64 images or .PRG files it uses are stored on a MMC or SD-card (FAT16 max. 2GB).  It's small size, ease of use and trendy casing with the perfect display make this device a collectors item. This project started in 2006 but is no longer being developed.

This project is called Serial Speech Synthesizer SAM "SSSSAM". A text-to-speech synthesizer with the true voice of SAM. The intended use is the VIC-20, but it also works on the C64, C128 and Plus4. Simply connect it to the userport of the Commodore computer and to your monitor using the audio mixing cable. 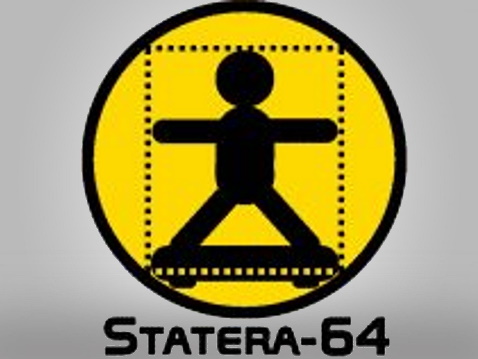 -=under development=-
This project is called Statera-64 "the open source balance board"
release date: to be determined

The Commo pad is a touchpad based device that can be used on the C64 and on your PC. It behaves like a KoalaPad, 1351 mouse (or a joystick) on a C64. And like a 2 button mouse with scrollwheel on a PC.

The rotary dial numpad, is just a little joke. But it really does work as I wrote a driver for the VIC-20 and the C64 for it. The idea behind this project is to make an homage to the rotary dial mechanism. Although I designed a completely new rotary dial mechanism that replaces the spring by a DC-motor. This way it is much easier to be made using 3D printing technology and commonly available parts.

The rotary joystick is designed to make playing the games "Declathlon" and "Crank Crank Revolution" much more fun. 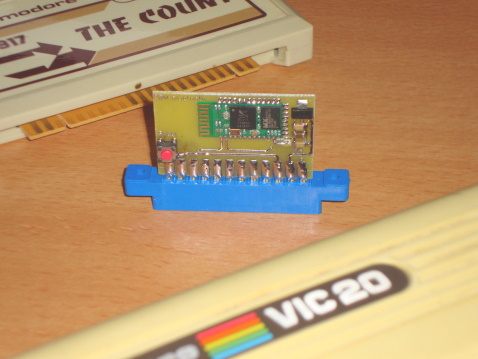 Android based speech synthesis gives the VIC-20 Scott Adams adventure games a voice. Although the concept does work, it wasn't as fun and practical as I expected.

The lighthammer is a project that just had to be done. Although it works with various lightgun games, I also wrote a 'smack-a-mole" game for it. And then I also just had to build and arcade cabinet to really complete the project

The arcade cabinet I've build to demonstrate the lighthammer can be used for many other games too. The keyboard and joystick can be hidden when not required.

This project is my variation on the concept of the Wonderfoon and Arduinofoon. But without the need to modify (destroy) the phone itself. This project was also published by tweakers in 2020.
The TeleJukebox makes a T65 rotary dial telephone function like a simple jukebox, intended especially for elderly people. The TeleJukebox is cheap to build and can be configured using a simple spoken menu system. Which allows for configuration of volume, playlist and Easter-egg settings. 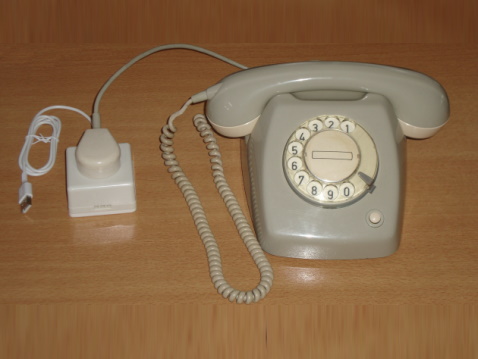 Another homage to the rotary dial phone. Using this device you can open up your webbrowser and visit your favorite website with just a single dial. Or perhaps dial a complete IP address and visit that. And ofcourse for some basic calculations you can also use your phone as an input device. Although this project is just meant as a joke... it does really work. It requires no modification to the phone and no software to be installed on the computer. 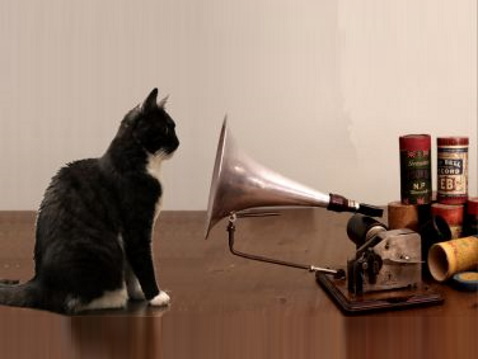 Wax cylinders are the most basic of sound recording, it all started with the phonograph. The reproducer is the most important part of the phonograph as it converts the humps and bumps (or hills and dales) of the cylinder into audible sound. I thought it would be fun to recreate such a device using modern materials (ABS, aluminum, boroslicate glass) and modern tools like a 3D printer and a hydraulic car jack. 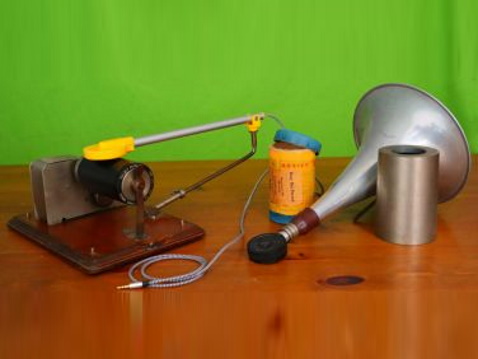 A piezo electric pickup element for an antique phonograph. This device requires no batteries and connects directly to the analog line-input of any audio device, for instance the line-in input of a computer. Allowing for an easy way to make recordings of this obsolete medium.

During a visit to a museum, my children learned about Morse code and received a paper with some small exercises. At home I build them a device to visualize the dots and dashes on a simple rotating screen, which instantly made clear why morse code consists of "dots" and "dashes". 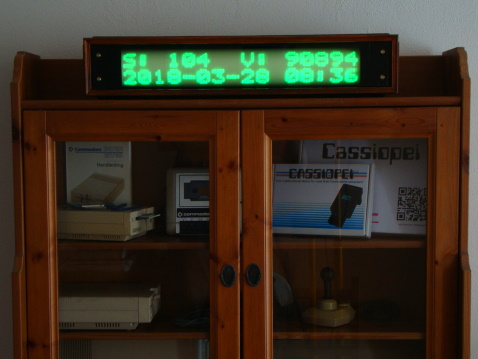 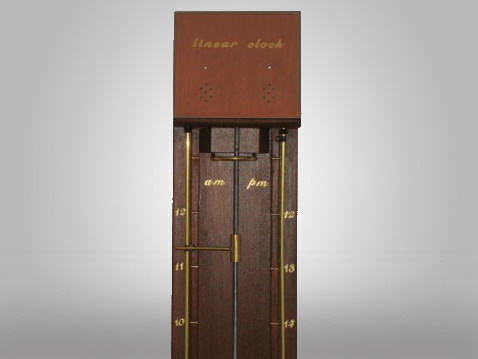 The glow in the dark display / clock was an inspiration for another clock. This clock is very simple in design and functions in a linear fashion. It is easy to read and even allows for an alarm function by placing one or more isolator block on the guide rails. 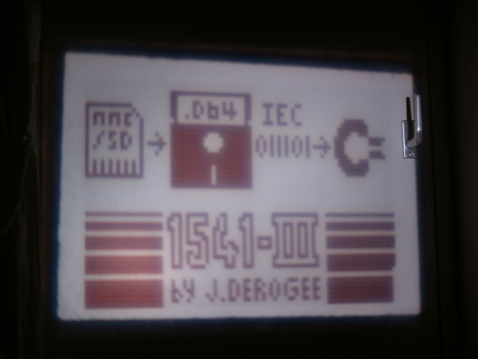 This project is an 84x48pixel beamer (hence the name since 84x48=4032). It was designed and used for the 1541-III project. It allowed to show the contents of the display to a large audience during demonstrations at the Commodore computer club meetings.

This project is basically an ordinary diskbox that has been converted into a digital clock. Time is indicated through the labels of the disks that are elevated. If you are not aware of this functionality it seems to be just an ordinary diskbox. Floppyclock: more than meets the eye.

This project use an old (1987) Brother HR-5C printer, with a Commodore IEC serial interface connected to an ESP8266, to print news items from an RSS news feed. This printer uses thermal paper and is pretty silent compared to an ordinary 9-pin dot-matrix-impact printer of that time.

My experiments with Computer Numeric Control or in short CNC. A simple machine I use with various tools for simpel MDF, plexiglass or foam engravings or cutouts. It's very slow and fall into the categorycheese-cutter. Hence the name, CC1 which stands for Cheese-Cutter-1. 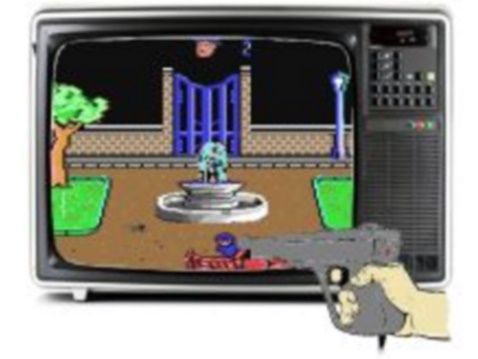 Information about C64 lightguns and the few available games that exist for it. 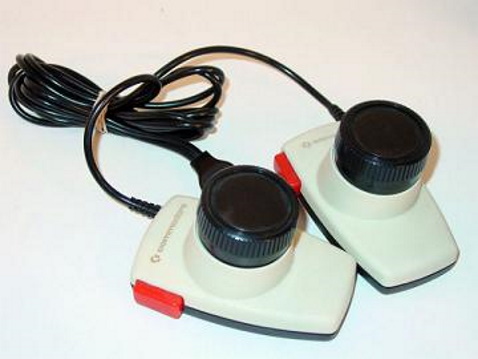 Information about the C64 and the paddle type controller.

My experiences with repairing my own equipment (fortunately for me this section isn't big). 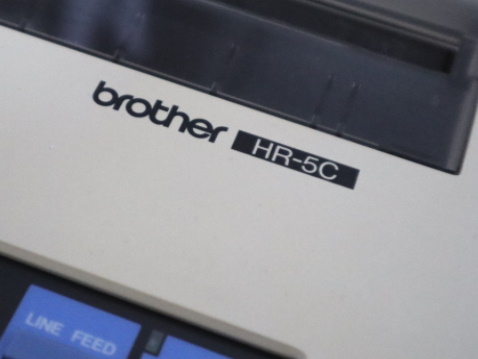 Information about the Brother HR-5C printer. The HR-5C is the HR-5 Commodore version, with the correct fonttype and IEC serial connection, so you can use it directly with your VIC20, C64, etc.

When I have completed a project, I present it to the world with a video. To make it a little bit more interesting to watch I try to create a story around it that explains my motivations for this project. Stories that sometimes have a silly twist. Feel free to take a look at my YouTube channel: https://www.youtube.com/user/janderogee Don't forget to subscribe and to click on the little notification bell to enable the function to receive a message every time a new video is uploaded.